When Malaysian Laws Put the Brakes on Pig Farm Pollution

When Malaysian Laws Put the Brakes on Pig Farm Pollution

Penang, Malaysia is mandating its farms modernize or shut down. But pig farms might not be the only, or main polluters along the whole river. Will this mandate bring relief to the ecosystem and impacted communities?

Editorial note: This article is the first of Macaranga's two-part series on pig farms in Malaysia, with an eye toward One Health.

A stench drifts up the five meters from the river to the bridge where we are standing. A sour, nasty smell, it lingers even after we leave the site. A local says the smelly river water comes from Kampung Valdor.

Their wastewater has been tarred for impacting everything from paddy fields and fisheries to high-end residential areas. But change is in the air as pig farming legislation and regulations kick in, though it is unclear if they will actually solve river pollution.

Nationwide, pig farm pollution was second of the top 5 river pollution sources in 2020, says the Department of Environment (DOE). There were 1.87 million pigs in Malaysia, according to the Department of Veterinary Services (DVS),  producing 75,000 tons of effluent per day. River pollution is concerning because rivers supply around 98% of water for human use, with 70% going to agriculture. 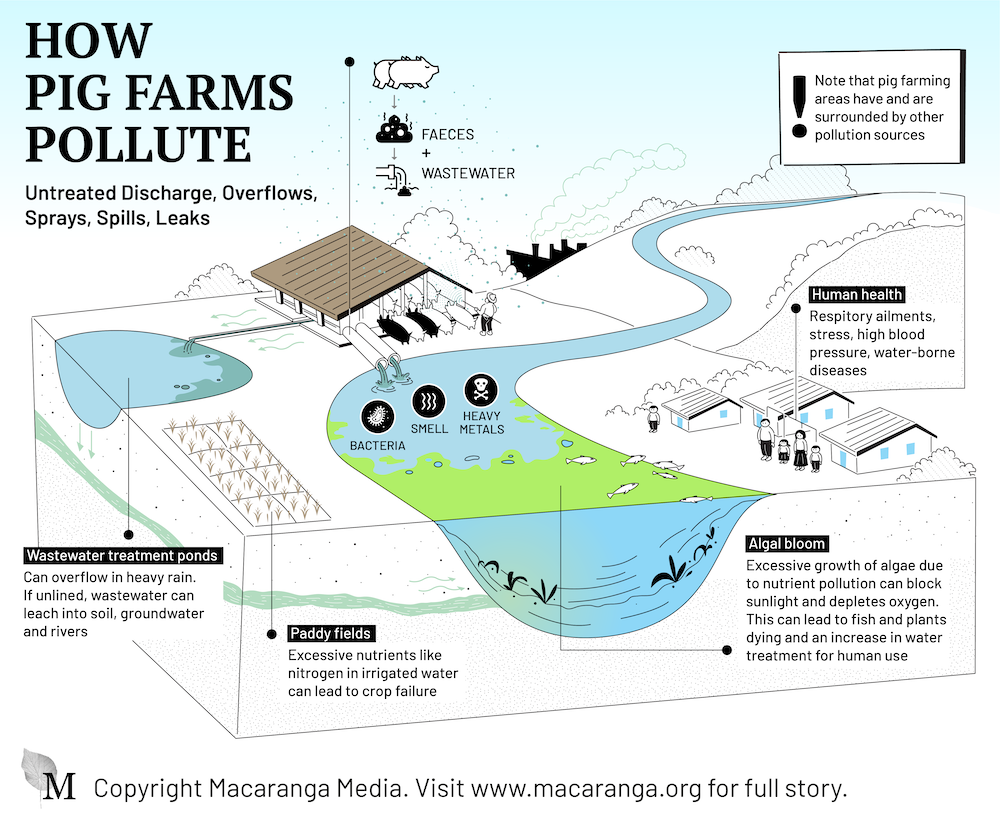 Pig farming is regulated by states, with enforcement by the state DVS. The second-largest pork producer in the country after Perak, Penang only recently replaced outdated laws with the Pig Farming Enactment 2016 and Pig Farming Licensing Regulations 2020. These started being enforced in 2020 and unlicensed farms shut down in January this year.

But Penang is the first state to mandate that traditional farms convert to the "modern pig farming system."

Since 2018, the state’s 167 farmers began to meet some of the law’s requirements, says Wong Fu Sheng, chairman of the Penang Pig Farmers’ Association. Farms received either operating licenses; licenses with provisions; or were not issued licenses.

This year, Fu Sheng estimates 99% of farmers have at least partially complied with requirements.

It is unclear how many farms nationwide have modernized but 14 have been certified under the Department of Agriculture’s MyGAP standard for good agricultural practices.

The two pig farming areas, Kampung Valdor in south Seberang Prai and Kampung Selamat in the north, are Chinese New Villages established in the 1950s during the Malayan Emergency (1948-60).

Rearing pigs was a core occupation as it was a critical self-sustaining food source in this period of scarcity. Homes were side by side open pig pens from which feces and wastewater washed into rivers.

But because of rising costs and “overly strict” policing by the DVS, farms in Kampung Selamat started polluting again, admits the village head, Wong Soon Ping.

“When the (BOD) enforcement is loose and farmers want to save cost, farmers will secretly discharge untreated wastewater. Less work for the farmers too.”

Discharging is also happening in the southern Kampung Valdor. Fu Sheng, whose family farm there modernized in 1999, says “most” of the 40 farms there continue to abide by BOD limits, “but some curi-curi (furtively) release untreated wastewater”.

Macaranga drove through both farm areas and documented sludge filling some canals, tea-coloured or black water draining from some farms’ pipes, and algal blooms in stagnant water.

Drains and waterways smelled, more pungently in Valdor, where the farms are closer to each other than in Kampung Selamat. Those farms are interspersed by homes and other industries.

The rivers into which the wastewater flows – Sungai Jawi and Sungai Kereh respectively – also had evidence of pollution in the form of smelly, discolored water, and healthy growth of riparian vegetation indicating excessive nutrients.

According to DOE, the BOD of both these rivers was Class IV, unsuitable for drinking even with treatment.

However, less clear is whether pig farms are the sole source of these rivers’ pollution. In place of the jungles that once surrounded the two new villages are now housing, agricultural plots and factories and workshops. Their wastewater, too, flows into rivers.

It is uncertain if villages in the whole area have proper sewage systems, and sewage has consistently been the top river pollutant, according to DOE’s Environmental Quality Reports. The indicator for feces and sewage, ammoniacal nitrogen, in both rivers from the pig farm areas, is Class V, unsuitable for human use.

Two environmental experts who declined to be named because they work closely with agencies, said river pollution is rarely caused by a single source. Fu Sheng complains that while pig farms “always” get fined, the factories in his village – “90% of whom are illegal” – pollute without repercussions.

Pollution from pig waste has been going on for so many decades that others who pollute “can get away from (being accountable) because people have always said, ‘It’s the pig farms, it’s the pig farms’,” stated Dr Nur Indah Ahmad, senior lecturer at the department of veterinary sciences, Universiti Putra Malaysia.

For example, from Kampung Valdor to the sea, Sungai Jawi and rivers that feed it pass through a mélange of factories, oil palm, kampungs, residential areas and right at the river’s mouth even, an aquaculture farm.

However, another fisher, Januri Hasan, is not so sure it is pigs.

“It’s the factories here, not upriver.” He gestures to the bank opposite. “Once a month, the river turns black and stinky. When we harvest and open the kepah (hard shell clams), they are already dead.”

It takes a week for healthy ones to regrow ready for harvest again. This has been happening for the last 3-4 years.

Research on heavy metals in the bigger Sungai Prai further north shows that pollution sources “speculated from the nearby urban runoff, industry activities along with the river, fishing and shipping activities, and land transportation emission may also accumulate for the pollution in the river.”

Penang’s new laws aim to clean up pig farms but more might need to be done about cleaning up the environment more generally, even for those who live right by them.

Hijauan Valdor is an upmarket residential area that shares a boundary with Kampung Valdor farms. In between is a canal into which flows thick lumpy sludge that is undeniably farm effluent, confirmed Penang pig farm association chairman Fu Sheng.

Residents whose houses are parallel to the canal, a mere 17 meters away, have to endure its stench day and night. But “it’s worst at 7-8pm, cannot tahan (I can’t stand it),” says resident Vigneswaran Sunder, something Macaranga can confirm. “You can’t breathe, you feel like you’re going to die.”

His neighbors Christine Saw and Goh Wan Chen list health complaints that include allergies, coughs, and runny noses. They blame this on the gases released by the canal’s effluent, but say no doctor will confirm the link.

“Staying here is a nightmare,” says Saw. “But how can we afford to move out?” Both she and Vigneswaran are from Penang island and settled there because “where can you afford to buy such nice houses on the island?”

What’s more, their houses are experiencing terrible rust which they also blame on the effluent but it is unclear if this is indeed the source.

When asked, the pig farmer association’s Fu Sheng says that for effluent to contain enough metal to cause rust, the pigs would have to be fed inordinately high levels of heavy metal supplements. He says the DVS tested their pigs and feed and found normal metal levels.

Meanwhile, in the northern pig farming area of Kampung Selamat, a creative solution had to be found for 300 paddy farmers whose grain was dying from excessive nutrients. The fields were being irrigated by Sungai Kereh, where the pig farm wastewater drains.

“For 40 years, Sungai Kereh has been black, smelling sour, killing our paddy,” says Saidin Hassan, chairman of the Pengkalan Batu paddy group farmers. “We farmers would also itch after working in the fields.”

In 2004, it was noted in the Penang State Assembly that 20—30% of the paddy areas were polluted and yields had dropped by 10—20%. Like Sungai Jawi, Sungai Kereh is a Class III “slightly polluted” river. In fact, a 1999 environmental report classified it a Class III too.

An officer from the Seberang Prai Utara district agricultural department confirmed that it was the nutrient-rich water that was killing the paddy. “These farms don’t use the allocated nitrogen subsidy because there’s already too much of it,” he says.

Saidin says farmers, the agricultural department and DVS had tried for years to solve the problem. But he stood firm on one point: “Petani kita mahu jaga, peladang kita mahu jaga.” (We must take care of both paddy planters and pig farmers).

At the end, though, the problem proved intractable and in 2019, water was diverted from another river instead of Sungai Kereh. “Now, the fish are back, the paddy is healthy,” says Saidin with a broad smile.

(Interestingly, the river from which the water is diverted, Sungai Jarak, is also a Class III river)

DOE told Macaranga polluted rivers can be rehabilitated, provided a holistic approach is applied. This includes implementing laws and regulations, enforcement and monitoring, awareness raising among farmers and the public, and implementing waste disposal solutions such as waste-to-energy biogas systems.

Such a comprehensive approach to the health of humans, livestock and the environment can be taken through the One Health concept, for which Malaysia is developing a policy.

A university network is currently trying to build collaborations among academicians, professionals, scientists and communities so that cross-sectoral skills and knowledge can be harnessed.

At the end, despite the murkiness of whether they are the primary polluter, there is no doubt that Penang’s pig farms are polluting rivers. The pollution has been cumulative and affects the health and livelihoods of communities who live around the farms and many kilometers away.

The association’s Fu Sheng has engaged with residents and other stakeholders and asks for more time to implement solutions.

At Kampung Valdor, a RM25.5 (US$5.6) million biogas facility to treat the waste and ensure zero discharge is expected to be completed next year. Residue from the plant would be turned into fertilizer, says the biogas company.

However, biogas solutions have been discussed for years in Penang and Sarawak and stalled. The residential community next door and even some farmers outside Valdor are skeptical whether all the farmers will keep up the monthly subscriptions to keep this plant going.

Still, Fu Sheng says, “We are convincing farmers to comply (with the new laws). We hope all will follow.”

This story was produced with the support of the Earth Journalism Network and was originally published by Macaranga on September 19, 2022. It has been lightly edited for length and clarity.

Panama City, Panama
David Veintimilla on Shark Protection: "Nothing Will Ever Be Perfect"
© 2023 Earth Journalism Network All rights reserved.