Without these birds, humans are at greater risk of contracting diseases such as Covid-19, scientists warn.

In Kenya’s Samburu and Laikipia Counties, cattle enclosures are made of strong metallic bars and chain links to keep predators away.

Before nightfall herders hastily guide their cattle into the predator-proof enclosures to keep their livestock safe.

But those corrals are also inadvertently protecting vultures whose preference for carrion has made them unlikely victims of growing human-wildlife conflicts.

Known for their distinctively balding heads, dull plumage and beady eyes, vultures are some of the most unattractive creatures in the wild.

Across the country and in many parts of the world, they’re also being killed by farmers who use poisoned bait to kill predators, unaware of the accidental avian casualties.

These deaths pose an even greater threat to the African vulture, a species whose numbers have dropped so dramatically it’s now threatened with extinction.

In the Maasai Mara, for instance, their population has declined by 50 percent in the last 30 years.

Scientists warn that without these birds, human beings risk contracting zoonotic diseases, such as rabies, Middle East Respiratory Syndrome Coronavirus (MERS-COV), anthrax and a host of other ailments transferred to humans by animals.

Recently, a farmer in Rumuruti, Laikipia County, was arrested for allegedly poisoning and killing 11 rufous vultures, seven tawny eagles, and a silver jackal – all endangered species.

The farmer, who is still under investigation by the Kenyan authorities, could pay up to Sh5 million fine (US$46,700), be imprisoned for five years or both, if found guilty.

Kenya Wildlife Service (KWS) officials suspect that after the farmer’s two camels were killed by a lion, he poisoned the carcasses, resulting in the inadvertent death of the 19 carrion hunters.

Such cases of brazen human-wildlife conflicts are common.

But the ugly tricks at play to keep wild animals at bay, the losses farmers incur due to wildlife attacks and the ultimate price both farmers and wildlife pay in the end are costly.

Unknown to many, vultures clean up the environment just as garbage collectors do.

Dr. Beckie Garbett, Vulture Conservation Manager at Birdlife International, says that in absence of vultures, populations of other less-desirable scavenging species, such as rats and feral dogs, could rise, which could have negative impacts on human health.

The avian scavengers, Dr. Garbett says, are nature’s very own clean-up crew that keep landscapes free of rotting carcasses,  hold down numbers of mammal scavengers and, in the process, limit the transmission of life-threatening diseases.

Between 1992 and 2006 for instance, at least 47,300 people died of rabies in India due to an increased population of feral dogs, which subsequently resulted in increased dog attacks –38.5 million additional dog bites – and rabies outbreaks.

An appraisal of the human health and other benefits of vultures in India published in 2008 discovered that the rabies outbreak correlated to the growing number of deaths of vultures in the country.

Unlike many birds of beauty whose roles are mainly plant pollination, vultures are well adapted to eating carcasses and are aptly equipped with a digestive system that contains special acids to dissolve any deadly pathogens.

The speed with which vultures clean up animal carcasses prevents the spread of diseases. Without them, more anthrax spores are expected to infect soil and remain viable there for decades.

“It is our duty to ensure that vultures continue to grace our skies and help keep healthy ecosystems intact,” said Dr. Garbett.

According to scientists, zoonotic diseases or zoonoses – diseases which can be transmitted to humans from animals – currently represent the biggest proportion of emerging diseases, such as Covid-19, which is believed to have originated from bats.

Globally, about one billion cases of illnesses and millions of deaths occur every year from zoonoses, according to World Health Organization (WHO) estimates.

Over 30 new human pathogens have been detected in the last three decades, 75 percent of which have originated in animals, WHO says.

Dr. Darcy Ogada, a senior scientist at the Peregrine Fund, a non-profit organisation dedicated to protecting birds of prey, says that out of the eight known vulture species, four types are critically endangered globally, two are moderately threatened, while the rest are in safe zones.

The threats are generally related to land degradation, she said, since many communities have encroached into wildlife conservation areas. The closer human settlements are to wildlife habitats, the easier it is for predators to attack the homesteads and kill livestock. This further leads to carcass poisoning and retaliatory attacks.

The invasion also never ends well for cattle owners either.

The Ministry of Tourism and Wildlife estimates that between 2014 and 2018, 477 people were killed in human-wildlife conflicts, while 1,263 survived with serious injuries.

While most vultures die as a result of poisoning, not all are killed by pastoralists. Others are executed by poachers who lace dead elephants and rhinos with poison to kill vultures that might tip off park rangers to their illicit activities.

As high-valued animals, such as elephants, pangolins, and rhinos are butchered for wildlife trade, vultures paradoxically get punished for not being too valuable to poachers.

“A single poisoning can end up killing vultures in large numbers because they move in swarms,” Dr. Ogada explained.

Between 2012 and 2014, more than 2,000 vultures were killed in poaching-related incidents in seven African countries according to Birdlife International.

“Wildlife poisoning is the primary cause of Africa’s declining vulture populations. We must not be mistaken that poisoning is not only dangerous to wildlife, it endangers human health and our natural environment. It must stop,” Dr. Garbett said.

In game parks such as Maasai Mara where dozens of wildebeests die and drown in the river during their famous annual migration, the carcasses are usually never an issue because they are taken care of by the vultures, observed Sydney Shema, a researcher at Kenya Bird Map.

Some researchers in Laikipia and Samburu counties are already training local pastoralists on proper handling of chemicals and how to identify poisoned animals.

So far 800 farmers have been trained by various organizations, including the Peregrine Fund, on chemical safety and livestock management while at the same time they are encouraged to install predator-proof enclosures.

About 350 predator-proof cattle enclosures have been constructed over the last 18 months in the regions.

Creating awareness among local communities about the dangers of using poisons to kill wildlife is needed to protect vital species like vultures and safeguard resources like watersheds that can be contaminated by chemicals, explained Dr. Ogada.

“Many farmers have no idea how poisonous some of these chemicals are,” he said. “They use them without wearing protective gear hence they end up affecting their health.”

A version of this story was originally published at The Daily Nation on May 22, 2020. This piece has been edited for length and clarity. Reporting for this story was supported by Internews’ Earth Journalism Network. 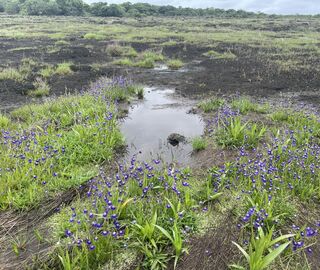