Eleven thousand. That’s approximately how many people are living in Tuvalu right now. That is exactly how many people are facing direct threats to their homes, livelihoods and identities as a result of rising sea levels, storm surges, cyclones and the other climate change-related events hitting Tuvalu on a monthly basis. Hundreds have already left this collection of atolls and reef islands far out in the Pacific and migrated to safer, more secure shores.

Two million three hundred. That’s how many people live in the Pacific islands including us in Samoa – according to the World Bank. Those numbers alone indicate that there are a whole lot of people who can accurately reflect on the risk climate change poses to their lives – yet, yet, Time Magazine chose to feature a European man to demonstrate what we stand to lose. 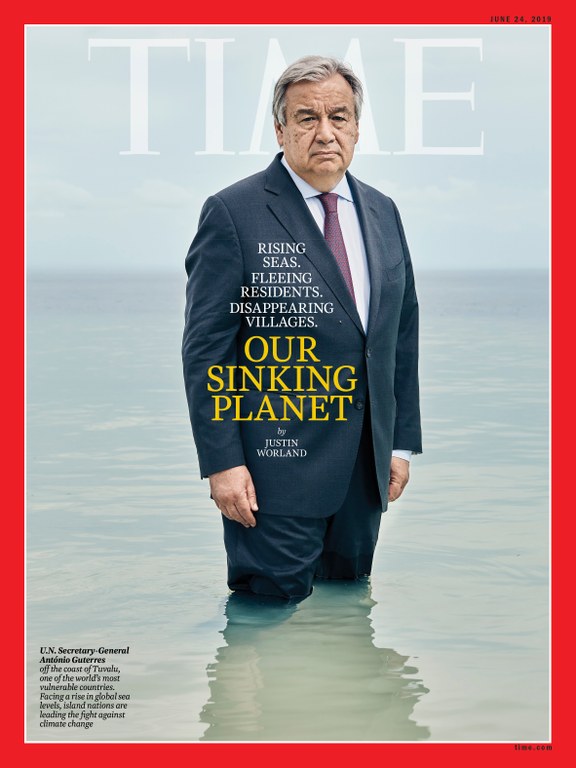 Don’t get me wrong, Guterres is an admirable Leader with a strong sense of conviction for the issues we face as islands – but he is not the face of Pacific climate change.

What a sad state of affairs – that in order to truly demonstrate and exhibit the impact of climate change on the atoll nations of the Pacific, on islands scattered across that ocean – we have to resort to European lenses to capture the loss on the cover of a major publication.

If you refer to previous climate change-related covers by Time you will see pictures of polar bears, Western activists, penguins, cities and politicians. Yet this issue, which is set in Tuvalu, was not enough to put an actual islander whose life is affected in real-time by climate change on the cover of the magazine.

Now, some might argue that it is just a magazine and shouldn’t matter – that politics and actions matter more. But this goes deeper than just a paper cover – this is about fair coverage and accurate depiction of an issue. Featuring the head of the UN standing in a suit off an island with residents who are legitimately facing seawater inundation, who have to literally carry their pigs so they don’t drown and hold up furniture to save it from flooding – is not only offensive to those going through these problems, but also a disservice to the practice of journalism.

The article itself is done well and covers the issue very well across the Pacific. However, the fact that it was not headlined by a Pacific islander is a disappointing nod to the need for a Westernized story lead.

Having conducted one of the first studies on climate change coverage of Pacific issues by global media back in 2009 at the Reuters Institute at the University of Oxford, I found the Time cover a disheartening and discouraging metric of environmental journalism practices worldwide. My study found that, at the time, there was minimal coverage of climate change impacts in the Pacific islands – and when there was coverage, it was about an issue in a developed country with the Pacific as a small example or the Pacific as part of Asia.

The Time cover is a testament to the fact that our issues, the fate of Pacific islanders, still continue to be marginalized and sensationalized by Western media in the pursuit of a sexy headline, while disregarding realities, facts and actual subjects of the climate story.

Part of the problem is that we are a minority. The Pacific islands are just not significant enough in their geography or people to warrant proper coverage or due justice by global media outlets such as Time. We are but a mere side thought when the true impacts of climate change are covered. As such, we are either sinking, fleeing or disappearing – but it’s more than that. There are economic losses and struggling governance systems resulting from the added pressures of extreme weather events. There are capacity issues due to the complexity of adaptation measures implemented locally and there are future existential issues that haven’t even been addressed in a manner that is realistic for islanders – especially those in nations like Tuvalu.

Hon. Enele Sopoaga, Tuvalu’s prime minister, along with all the other Pacific leaders (including our own Prime Minister in Samoa) have consistently reiterated the vulnerabilities of Pacific people over the years – vulnerabilities founded on real fears and true experiences on an annual basis.

As islands with a culture of skirt-wearing men, perhaps the image of a man in a skirt (lavalava/ie faitaga) and flip flops standing in the ocean is not strong enough for our colleagues at the Time. But if true journalism principles are applied, it would not matter if Sopoaga were standing in a grass skirt. His people are the true victims and that is the story – not about the thought of Gueterres’ handcrafted leather boots and socks in the water, but rather the reality facing a people whose land is slowly submerging beneath them as they themselves find ways to rise above it.

This piece appeared in the Samoa Observer on June 25, 2019. The author is an independent climate change journalist from the Pacific islands. 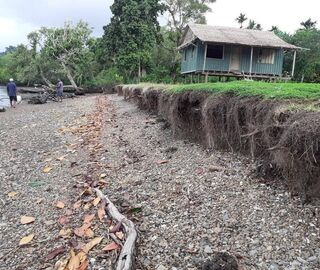 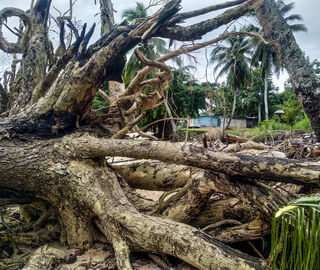