The Presidency of COP26 released two important drafts concerning the deal to tackle the climate crisis on Wednesday around 6 am GMT.

Two drafts, dubbed CP26 (referring to the general text related to the COP26 negotiations) and CMA3 (associated with the implementation of the Paris Agreement in 2015), will be the basis for each country to negotiate on how to overcome climate change.

For the public in Indonesia, the drafts will determine whether Monas in Jakarta will sink and if Indonesia loses hundreds of islands due to rising sea levels in the next decades.

If the drafts, scheduled to be approved on Friday (12/11/2021), do not reflect the highest ambitions to reduce greenhouse gas emissions, then all of our worries will most likely become realities.

Climate observers, environmentalists, and negotiators revealed that yesterday's two manuscripts have some breakthroughs and gave some hope for developing countries like Indonesia.

Iskhaq Iskandar, Professor of Physics at Sriwijaya University, said that the drafts reflect the high ambition of every party to reduce emissions.

"There is a stronger international cooperation commitment to preventing a temperature rise of 1.5 degrees Celsius to 2100," he said.

Iskhaq, who is also Lead Author of Report 6 (AR6) of the Intergovernmental Panel on Climate Change (IPCC) Working Group I, added, "That is in line with the recommendations of scientists in Working Group 1."

Another happy news is the pressure on developed countries to raise funds exceeding 100 million US dollars for developing countries for mitigation and adaptation purposes.

"This is comforting for developing countries," said David Waskow, International Climate Director of the World Resources Institute, in discussion with journalists who were covering COP26 yesterday.

Developing countries previously asked the developed ones to contribute to climate change mitigation and adaptation with a total fund of 100 million dollars until 2020. This target failed to be met by developed countries, triggering disappointment and distrusts.

"The existing drafts are a golden opportunity for Indonesia to prepare a well-measured climate adaptation and mitigation framework," said Iskhaq.

"I believe we can explore our local wisdom and develop them for mitigation and adaptation purposes," he said.

Waskow said one other good development is the obligation for each country to have a more ambitious emission reduction contribution target (NDC).

The drafts mention the need to prevent the rise of the Earth's temperature by 1.5 degrees Celcius, the most ambitious target under the 2015 Paris Agreement.

The drafts asked each country to update its National Contribution Target (NDC) by 2022 to achieve the emission target by 2030.

Another good news is the "calls upon parties to accelerate phasing-out of coal and subsidies for fossil fuel."

If the text passes negotiations, Indonesia will have to move on faster to leave coal.

Although breakthroughs do exist, the drafts prepared by the COP26 presidency, led by Alok Sharma, have limitations.

Regarding the target of preventing a 1.5 degree Celsius increase, for example, according to Waskow, "it is not clear and clear whether that is what all parties want to achieve."

The drafts say the world needs to leave coal power plants (PLTU). However, those encouragements only apply to unabated coal fire plantations, such as those without Carbon Capture Storage (CCS).

"The G20 commitment before COP26, they agreed to stop financing the coal power plant if the power plant does not use CCS (unabated coal fire plantation). If a plantation has it, it still can get funding," he said.

Fabby Tumiwa from the Institute for Essential Service Reform (IESR) added that the weakness of the text related to energy is that there is no exact time for coal phase-out.

The drafts also give fewer concerns to gas.

Daniel Murdiyarso of the Center for International Forestry Research (CIFOR) said, "the financing part is still not encouraging because it is not specific and only support for a short-term period."

These two days will be the tensest chapter in COP26. All good news is surely welcomed, but they all maybe not pass the negotiation.

The push to accelerate coal may be countered by countries whose economy depends on selling it.

"Saudi Arabia and Russia are very clearly against it. Others are less outspoken," Waskow said.

Up until Thursday (11/11/2021), there is still hope that it will pass. The Beyond Oil and Gas Alliance by the United States, Sweden, and some other countries may strengthen efforts to end fossil fuel usage.

Another issue that surfaced today is the objection from developed countries to providing long-term financing and loss and damage.

Laksmi Dewanti, Director General of Climate Change Control (PPI) of the Ministry of Environment and Forestry (KLHK), revealed that many Indonesian interests had been accommodated, for example, Article 6 of the Paris Agreement, which concerns voluntary emission transfers and trade.

"Now, there are more similarities. We already know what we want because we already have a decree on the economic value of carbon. But it can still change during negotiations," she said.

This story was originally published in Bahasa Melayu in Kompas on November 11, 2021. It was produced as part of the 2021 Climate Change Media Partnership, a journalism fellowship organized by Internews’ Earth Journalism Network and the Stanley Center for Peace and Security.

Banner image: Temperature of the Earth is likely to increase 2.4 degrees Celsius by the end of this century / Credit: Wikimedia. 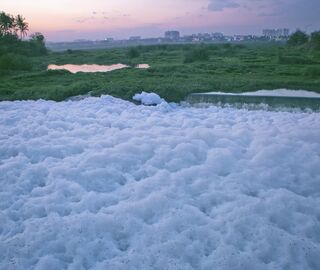