Women in coastal areas, apart from being an integral part of the fishing community and having a huge role to play in drying fish and selling them at markets, also manage the entire household.

“My husband catches fish and I help him in sorting,” said Ratna, 40. “Now as the varieties of fish go down, he has to sometimes go to the deep sea. I then manage the household, taking care of the children and often going to the market.” 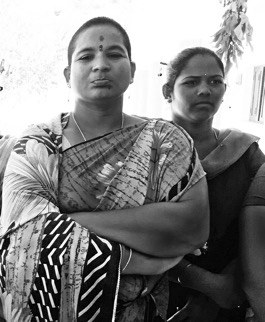 In Mangamaripeta, a coastal village in eastern India, women like Ratna also need to carry more than 20 buckets of water a day, as they get only piped water once or twice in a week in a place far from their village.

Women whose families can afford water packaged in pouches said, “Our children and head of the family drink the packaged water, and we drink the water we get.”

That water, which they drink and use for cooking, is saline.

Ratna and two other women who have lived for years near the coast say the conditions there are taking a toll on their health.

In a media workshop in Visakhapatnam on climate change, climate justice and resilience in the Bay of Bengal region organised by Internews’ Earth Journalism Network and the Third Pole, Patralekha Chatterjee, who works on health issues facing women in coastal area said, “The amount of dietary salt consumed is an important determinant of blood pressure levels and overall cardiovascular risk.

According to Chatterjee, recent studies make it clear that women living in coastal areas are at maximum risk.

“Women in coastal regions often spend long hours in brackish water collecting shrimp fry for sale to the shrimp farms - this can be eight to 12 hours a day. Such prolonged exposure to saline water leads to skin diseases, which has other effects on family life,” she said.

Chatterjee also mentioned two recent studies, one by the International Food Policy Research Institute, and another by Ohio State University, that have established that saline intrusion is forcing migration from coastal areas.

Meanwhile, many of the women from fishing communities have become engaged with “Fish Nutri Cart,” a self-help group that sells fish delicacies and has received 10 lakh rupees of funding from the state government of Andhra Pradesh.

Seventy women from small-scale fishing communities are working currently in the self-help group.

“We earn approximately 10,000 rupees per month now,” said group member Maramma. “There are three entrepreneurs and 70 workers in the entire project and were get mostly Bengali tourists as our customers. The shop works from 4 pm to 10 pm every day except Thursday.”