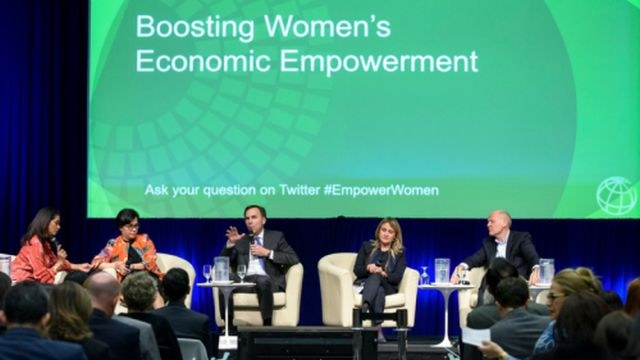 "The GEF (Global Environment Facility) has long emphasised on gender - still, every woman, especially in our Pacific nations, needs to walk the talk and make sure that they enjoy the same economic rights as men," Heine, the first woman to lead an independent Pacific Island nation, told IANS in an interview.

Heine, who was elected President of the Marshall Islands in January 2016, was in this Vietnamese tourist resort city to address the GEF Assembly, the organisation's highest governing body.

The assembly saw attendance of 1,200 delegates, including ministers and other representatives, from all its 183 member-countries, with bold commitments for action to avoid an environmental catastrophe.

She advocated that building capacity on gender equality also helps catalyse actions that have the potential to materialise greater environmental impact.

For Heine, the low-lying nations like hers are still grappling with an existential threat in the face of the growing global environmental crisis.

According to her, the GEF, the world's foremost institution for financing environmental change, has given a billion dollars in grants to safeguard the environment.

"The work of GEF supporting developing countries with nationally-led emission reduction efforts and protection for millions of people vulnerable to climate change has saved lives and improved our chances for survival. Still we need a political momentum in tackling climate challenges," a confident Heine said.

Around 50 heads of government will hold the world's first-ever virtual summit on November 22 that Heine announced at the GEF Assembly.

The carbon-free summit will bring together leaders of the 48-nation Climate Vulnerable Forum (CVF), which represents many of the countries most threatened by climate change.

Heine, who will soon assume the chairmanship of the CVF, announced that the summit would be convened entirely online as a "Virtual Summit", showcasing intentions to work in new and innovative ways and to build broader coalitions.

The summit was immediately acknowledged by global leaders like French President Emmanuel Macron and California Governor Edmund G. Brown Jr. Heine said it is a crucial step for helping to renew political momentum and awareness to enable the vulnerable to survive and thrive.

"Our summit will be showcasing our intensions to work in new and innovative ways and to build broader coalitions across society for the change we need.

"Small countries like mine are showing leadership through ambitious mitigation targets, we want every country to step up the ambition of their own NDCs (nationally determined contributions) if we are to stay within the 1.5 degrees Celsius temperature limit we set in Paris (in 2015)," she said.

"We are working hard to match our international engagements at the national level. Under our 2025 climate target, we have committed to a 32 percent reduction in emissions compared to 2010 levels, and we have already committed to bringing forward new and more ambitious target for 2030."

The former Education Minister, whose country played a crucial role at the 2015 Paris climate summit, is confident that optimising tapping of renewable energy sources could help overcoming climate change mitigations.

She praised GEF's contribution to addressing chemicals and pollutants played a pivotal role in paving the way for a recovery of the ozone layer.

Describing the CVF summit as an important opportunity to accelerate action towards a low carbon future, GEF CEO and Chairperson Naoko Ishii said: "At this critical time, we all need to raise our climate ambitions and the GEF is committed to transformational change."

The Sixth GEF Assembly, held once in four years, took place from June 27 to 28 here. It also saw the presence of President David Granger of Guyana and Prime Minister Nguyen Xuan Phu of Vietnam.

(Vishal Gulati was in Da Nang for the Internews' Earth Journalism Network Biodiversity Fellowship Programme at the Sixth Global Environment Facility (GEF) Assembly. He can be reached at [email protected] )

COP26: Are food systems finally on the menu in climate commitments?