Women are on the frontlines of climate change, both as those affected by it, and as the first responders to the crisis. This holds across the region, as women in Pakistan, India, Nepal and Bangladesh struggle to deal with the crisis of water.

Bangladesh is the country most vulnerable to the effects of climate change. Chandrika Banarjee has been working in Shyamnagar Upazila, Satkhira district in the southern part of Bangladesh, since 2000. She is the director of a local NGO, Nakshikantha Mohila Unnayan Sangstha, or the Nakshikantha* Women’s Upliftment  Organisation. The group focuses on the health and environment rights of women . She talked about these issues with thethirdpole.net on International Women’s Day. 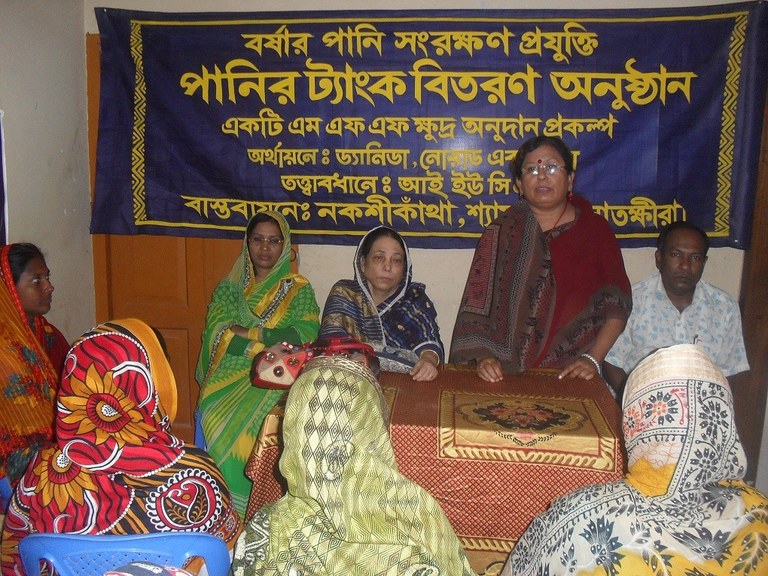 Nusrat Khan (NK): In the areas that you work – the coastal areas of Bangladesh – what is the biggest challenge when it comes to women and water?

Chandrika Banarjee (CB): In the coastal belt, the people living in the area adjacent to the Sundarbans are most vulnerable due to the fact that most of the water is saline. This means that women need to walk a long way to get fresh water to use for drinking and cooking. In some areas they need to go more than 3 km to reach a source of fresh water. For that reason, half of the day is lost only to access fresh water, which is a basic need.

NK: Other than the distance they walk, and the time they spend in their search for water, are there any other consequences?

CB: There are several health crises among the women in the affected area. Chronic dysentery, skin diseases, excessive hair loss, urinary tract infections and miscarriages are the most common problems. Apart from those, a number of women who are unable to get fresh water due to distant water sources, resort to drinking saline water on a regular basis and suffer from high blood pressure and liver problems. In the villages next to the Sundarbans, women also work in the water. They catch shrimp larva and crabs in the river. To do this, they stay in saline water for extended lengths of time, which creates other health problems, especially related to the skin.

NK: Does this have any effect on social relations?

CB: Yes. There is a social crisis in the area also related to the water problems. As most women spend the early hours of the day collecting drinking water, they face problems in completing the other household chores on time. This, in turn, creates tensions and disputes within families, and often leads to domestic violence. In addition, young girls face “eve teasing” [a South Asian term for sexual harassment], as they need to travel far from their own village. Because of this harassment girls refuse to collect water and consume available saline water. Another thing is that much of the population of southern Bangladesh lives below the poverty line. Further economic loss due to salt water intrusion leads to even more hardship, especially as time spent in water collection limits time that can be spent to earn money. Due to high unemployment a number of families are planning to migrate to India or other countries.

NK: Bangladesh is already known as the most climate vulnerable country and there are a number of initiatives that have been taken for resilience. At present, what sort of action is visible?

CB: To cope with climate change and salinity contamination, some initiatives have been taken. Among them, pond sand filters (PSF) [PSFs are artificially constructed ponds, locally known as “sweet water ponds” which are replenished by rainwater during the monsoon. This rainwater is then pumped by hand into a storage tank through a filter chamber] for supplying fresh drinking water has been very effective. In addition, developing underground reserves to conserve rainwater by Nakshikantha, excavating ponds by IUCN, supplying water using solar power developed by Shushilon are a few initiatives to get fresh water easily. But these are not enough. There are several policies on climate change resilience, but no clear actions related to women are visible here. During COP21, women’s issues were not adequately addressed (Read:Women and Climate Change: the view from Bangladesh). Our organisation is working to ensure women’s rights at the grassroots, but this also needs broad, institutional support at the national level.

We also have to solve governance issues. The intrusion of salt water is not only due to climate change. Shrimp cultivation has expanded haphazardly in Bangladesh. But shrimp need salt water to breed, and inland salt water ponds to breed shrimp can contaminate freshwater sources. For example, when water levels rise during the rainy season, the salt water overflows the shrimp farms and pollutes the freshwater sources. The owners of the shrimp farms tend to be rich and powerful, and thus the local communities, especially the women who are most directly affected, are unable to get redressal. If law enforcement authorities took action to protect the drinking water sources by regulating the creation of saltwater shrimp farms, or by ensuring compensation by their owners if the shrimp farms polluted freshwater sources, then this additional pressure would be removed from the women in these communities.

NK: What possible changes should be taken at the policy level to secure the water rights of women?

CB: In terms of women’s rights, the women of the rural area tend to be really vulnerable. To be aware about water rights, they first need to be more conscious about their basic rights. This needs a social awareness movement. The initiatives of the government regarding climate change are good so far, but the gender aspects are poorly managed. For example, the government is establishing satellite clinics in every union [unions are the smallest rural administrative and local government units in Bangladesh. A union consists of nine wards, with each ward usually corresponding to a village] to give primary treatment, but women are not given priority. Education is a great way to exit poverty, but many adolescent girls (no boys) are forced to leave school to gather water for the house. The education policy has to bear this in mind. If the water crisis increases in severity, the women in this land can never get their freedom.  In our male dominated society, the male members of the family never go to take this load. If women refuse, they may be divorced, leading to more stigmatization.

Therefore to secure the women rights it is the high time to secure the water rights in the coastal belt of Bangladesh. It is very urgent to pay attention to how women’s rights are restricted due to water problems. Without paying attention to that, no forward progress is possible.

* Nakshi is a folk pronunciation of naksha (decoration), and kantha is a very light duvet, usually made by stitching old and torn saris together, ideal for the mild winters of Bengal. The organisation works for (poor) women who stitch such duvets.

Nusrat Khan is a freelance journalist based in Dhaka.