A cyclone in 1999 and flaws in a massive artificial waterway have altered water flow in Pakistan’s Sindh province and led to seawater intrusion, forcing many villagers to give up farming

Was it force of nature, manmade folly or a combination of both that forced him to become a fisherman after he lost his agricultural land to the sea, Sajan Sheikh, a long-time farmer in Pakistan’s Sindh province, wonders as he looks back 16 years ago.

That’s when a category three hurricane hit the coastal districts of Thatta and Badin, killing more than 6,000 people and leaving hundreds of thousands homeless.

However, a World Bank project – the Left Bank Outfall Drain (LBOD), intended to drain effluents into the sea but has actually resulted in seawater flowing backwards in many places – has also contributed immeasurably towards the destruction of lives and livelihoods.

Technical flaws in the massive artificial waterway, built during the 1980s and 1990s, have altered the pattern of water flow and drainage, leading to the destruction of vast swathes of wetlands and agricultural lands.

And farmers like Shaikh are bearing the brunt. The 50-year-old says that sea intrusion had started even before the 1999 cyclone. He had heard from his elders that the sea, which now surrounds his village, Haji Hajam Shaikh, in Badin district, was once 100 kilometres away. “Now, Zero Point (the point where LBOD meets the sea), is right here,” he said. They enter the waters to go fishing virtually from their village itself.

Shaikh, whose elders were called lords of the area once, is now struggling to make a living. “Our livelihood was land and livestock but now we are fishing because we have nothing,” he said, adding that LBOD had led a path for the sea and high tide saw the waters moving rapidly upwards.

According to Iqbal Haider, head of the civil society organisation Laar Humanitarian Development Programme (LHDP), Zero Point had moved northwards by around 15 kilometres in 15 years. “After 1999, it is moving towards the coastal belt every year… Livelihoods are suffering. Hundreds of dehs (that incorporate thousands of villages) are no more,” he said.
LBOD flows 500 kilometres from north to south in Sindh province and collects excess irrigation water, saline seepage, pumped saline groundwater, rainfall runoff and industrial and municipal wastewater and ends at the sea in. It ends at the sea at Zero Point in Badin.

The World Bank funded project was remodelled and widened in 1986-87 from a small drain in 1962. Villagers had objected to the design as its flow was against the wind. This has led to freshwater lakes being polluted and thousands of villages being ruined with seawater flooding in.  Sea intrusion has caused the destruction of dozens of small lakes, including two Ramsar sites: the Narehri and Jhubo lakes.

According to a 2003 survey report of the Sindh revenue department, the sea had intruded into more than 1.2 million acres of land in Badin and Thatta districts. However, the figure is almost three times that with the waters occupying 3.5 million acres of land, said Muhammad Ali Shah, water expert and chairman of the Pakistan Fisherfolk Forum (PFF), a civil society organisation that works in the coastal belt.

Hundreds of villages of Badin and Thatta remain cut off with pathways full of seawater and levels rising.

The double whammy of the cyclone and the ill-effects of LBOD have seen many like Shaikh who have been forced to change their occupations and become fishermen. They fish in creeks or ponds but chemical discharge has reduced the catch and some are being forced to migrate to distant towns.

The situation is similar in Thatta district, where the famous port town of Keti Bandar is surrounded by seawater with only a stone embankment to protect it.

The sea naturally moved backwards with the erosion of rivers. But now the situation has completely changed with the sea moving upwards. Fateh Marri, chief economist of the Sindh government’s planning and development department, told thethirdpole.net that sea intrusion started in 1998 when LBOD was damaged near Badin. The seawater moved upwards with the channel receiving less water from the Indus below the Kotri Barrage (the last barrage on the river). There was water scarcity in the years 1999, 2000, 2001 and beyond.

The resentment against the World Bank project runs deep.

“The saline water of LBOD and the sea has affected our lands,” said Abdul Aziz Brohi, who lives at the banks of the LBOD in the small village of Ameer Bux Brohi in Badin.

“In the cyclone of 1999 and the floods of 2003, even link drains flowed back. Underground water, which was sweet before LBOD, is now brackish. It is sweet only during the rabi season (sowing season for wheat) when canal water reaches the area. Otherwise, even getting drinking water for human and livestock has become difficult.”  He said there was no fodder for livestock, so milk production had also been affected.

Living near the vulnerable embankments of LBOD that can be damaged with strong winds and high tide, Brohi fears the rain and cyclones. “People remain awake the entire night when it rains.” Unless there is stone lining on the banks of LBOD, he added, the ravaging waters will keep eroding the banks and flooding into the land.

“The grains (mostly wheat) grown on our land have little vitamin content as the sub-soil has been affected. There has been a decline of 50% in crop production.”

Likening the sea to a crocodile, Brohi said climate change was also playing its role with increasingly erratic weather patterns.

Each incident of floods, heavy rains or other disasters exacerbates problems. In the floods of 2011, which affected over six million people and millions of acres of land, his village was destroyed too. Against a total capacity of 4,000 cusec, LBOD saw 18,000 cusecs water flowing through.

Though rehabilitation is the responsibility of the government, it is being undertaken at a small level by civil society organisations such as LHDP, which has raised a 2.5 kilometre embankment near Badin’s Shaikh Keerio village and reclaimed around 80,000 acres of land from the sea. 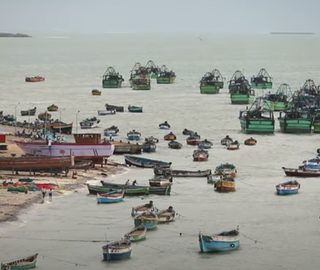 Tamil Nadu, India
In India, destructive fishing, fueled by subsidies, is depleting the seas of their bounty

Mangaluru, India
Trawling for trouble along the Karnataka coast 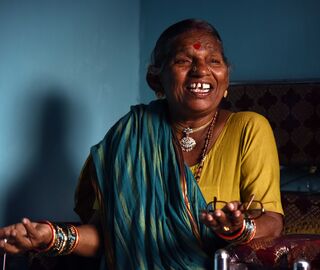