An introduction to the negotiation session in Nairobi, Kenya, from June 21-26.

Yian Lee, an EJN fellow and staff reporter at Initium Media offers a concise introduction to the negotiation sessions in Nairobi from June 21-26, a timeline of major developments in the negotiations thus far, and details on the shifting of the final COP venue to be held in December this year from Kunming, China to Montreal, Canada. Lee elaborates on the three major goals in the post-2020 global biodiversity framework and the most significant themes still being debated as the framework takes shape, and how these will affect local biodiversity policies in Taiwan and China.

Quoting Paul Leadley, an expert on biodiversity from the Intergovernmental Science-Policy Platform on Biodiversity and Ecosystem Services (IPBES) he explores why the biodiversity crisis generally gets far less media attention than the climate crisis — though the two are closely linked — and the paradigm shift underway as the relevance of biodiversity for human health and well-being becomes clear.

Lastly, Lee talks about the progress made during these rounds of negotiation, which fell short of many delegates’ expectations but did move the prospects for a global accord forward.

This story was produced as part of a reporting fellowship to the 2022 UN Convention on Biological Diversity’s 4th Meeting of the Open-ended Working Group on the Post-2020 Global Biodiversity Framework, led by Internews' Earth Journalism Network. It was first published on 26 June 2022 in Initium Media. This summary has been translated to English and lightly edited for length and clarity. 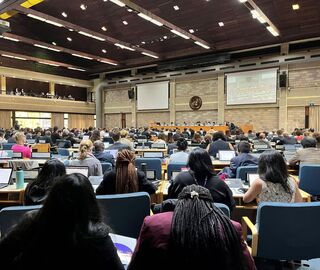 Nairobi, Kenya
Tough Road Ahead of COP15 in Montreal For New Biodiversity Deal